This post follows somewhat in line to Rethinking Funding For Grassroots Teams and is related to the current in discussion Kusama OpenGov Incubator Fund, but is also related to pretty much every other pain point in Polkadot for incumbent and emerging teams - no matter their size or scale.

Currently the Web3 Foundation exists to research and fund Substrate/Polkadot related technologies. Substrate Builder’s Programme, aims to take this starting point and skill up founders, teams and partners to the point they can prove out a ‘use-case’, generally so they can impress VCs who will back their as yet unproven project.

However beyond that, you’re on your own - and as everyone is realising, mainnet / onchain governance / parachain bonding / leases / treasury funding / community management etc is a whole other beast.

Being good at raising money and building things people use are two very different skills.

Developing a parachain is not like launching a startup, it has some elements for sure, but it’s also like running a social network - not just the infrastructure, the actual people. You started a company - but now you find you’re part of a cooperative… feels different huh

In crypto, people raise far too much, far too quickly, are forced to list too soon and overall succeed for their backers, but fail miserably for their users.

As a result, the waste is disgraceful - time, talent and capital. People can write this off to the cost of ‘experimentation’ - but generally the people shaping those narratives so eloquently on podcasts and in top publications are those who benefit by being insiders, with a portfolio of bets, and massive information assymetry advantages, rather than those actively trying to launch a useful and dare we say it sustainable project.

It may seem obvious but its worth stating the point, that being brilliant at selling a vision, nailing exchange listings, and pumping your bags to the moon through insider relationships, influencer partnerships and big name advisors is an entirely different skill, to the slow, boring and incremental progress towards a sustainable and scalable business model - aka you bring in more income, than you spend.

So no, there aren’t many users in Polkadot/Substrate, but there are enough. The wallets are good enough, the basic tools are fine, the talent is here, we just need to start rethinking some of the basics.

Rather than constantly requiring new money and new talent to come in, we can think in a far more regenerative fashion that is focused on driving peoples attention to the technologies primary differentiators vis a vie other ecosystems and making better use of the assembled talent and resources already here.

Currently there are a vast amount of underutilised ecosystem resources - empty blockspace, treasuries, talent in parachain teams, willing contributors and collective intelligence/experience that just doesn’t get shared around.

Instead, everyone tries to go it alone, raising money externally, before floundering around for 9 months, suddenly realising that what sounded great on paper, had no real pattern match for the current reality of the ecosystem.

None of this is gonna be pretty - things are going to get a lot harder before they get a lot better, its going to be grind. For some this will mean going under / losing leases - the distance to fall is just too far to restructure. For others the stress will be too much, its just wont be worth the constant barrages of demands for irate token holders.

A solution that aims to shift the design culture

W3F/Substrate Builder’s Programme gets you so far, but then you’re in for a world of pain, where all your traditional marketing techniques, influencer relationships, insider deals and ‘Web2’ incentives will only get you so far.

Raise VC and flounder around for a year, achieve not much, then figure out you need to go back to basics, or lose your slot, or maybe even start again.

What if you got the basics with substrate builders/w3f as usual, and then had some actual hand holding into launching a parachain by dedicated on-chain orgs/specialists based on and around current KSM/DOT parachains.

These specialist groups help you develop / test / bullet proof your concept in return for stake in the network that would be collectively owned as a public good.

And then be your first users, testers and cheerleaders.

Then we’ll help you raise small amounts of funding via treasuries using novel fundraising models that align incentives better than crowdloans and ensure your overheads are orders of magnitude lower than the first generation of parachains and with a massive reduction in headcount.

Who knows, this might also be a path for funding from more discerning VCs who see huge value in proving out not just the theory of Substrate, but the practice.

Then you will spend your funds on chain services offered to you by native ecosystem organisations (proxies) based on relevant chains, each offering some super niche, but highly valuable piece of the puzzle - you hand off literally all you don’t need, and focus on your own application specific use case.

Ultimately we atomise the cost of doing business as a parachain, make onchain collaboration instrumental to the ecosystem’s development, drive actual use of XCM in the process and ultimately make this a coperative structure, rather than a lonely, combative and stressful pursuit, where those who shout the loudest, are somehow deemed to be the most knowledgeable.

This is an actual functional, internal economy, where value, talent and capital is recycled through the ecosystem in a far more efficient and effective way.

I’m still not 100% sure of what you are suggesting. Is this like a combination VC fund where teams work together? Is this something that exists or something that you would like to encourage?

Key point is there are great ‘off-chain’ support structures for individuals / teams and their ideas - all the way up to connecting them with VCs and even getting to a crowdloan / slot auction.

There’s half of the challenge not catered for.

Figuring out the on-chain support is key to enabling sustainable internal economy, reducing costs for onboarded chains and driving intelligence and insights back off-chain into the next gen of projects that are incubated. 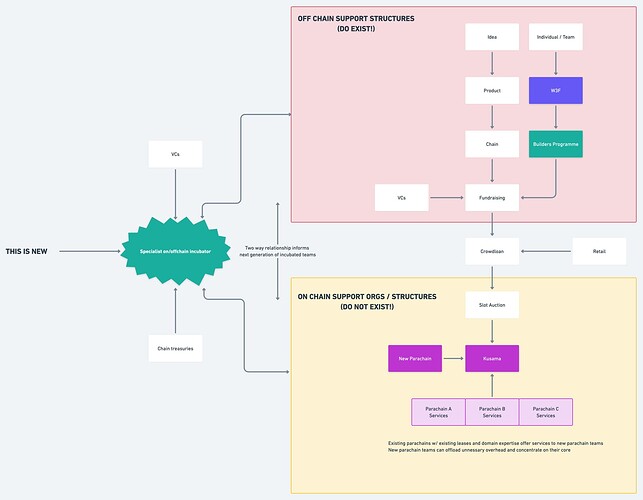